skip to main | skip to sidebar

Book Review: A Princess of Mars 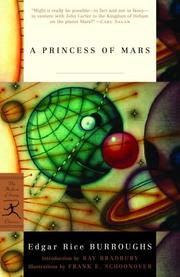 A Princess of Mars was the first book written by Edgar Rice Burroughs, more famous as the inventor of Tarzan. Dissatisfied by the adventure stories in the pulp magazines he read, he thought he could do better. His story was originally published in 1912 in All-Story Magazine as "Under the Moons of Mars.

The story takes place shortly after the American Civil War. John Carter, a Southern gentleman, is mysteriously transported to Mars. Since Mars has a lower gravity than Earth, he finds that he has what appears to the inhabitants to be superhuman strength. Taken prisoner by a race of monstrous and agressive Martians, he falls in love with a fellow captive, Dejah Thoris, princess of a race of humanoid, civilised Martians. Many thrilling, death-defying adventures ensue.

Mars is very imaginitively described (from the perspective of 1912), and the story is full of action, but none of the characters have any depth to them, and John Carter really only survives his adventures due to a combination of superhuman powers and lucky coincidences. I found the book entertaining enough while I was reading it but, to me, it's not very memorable. I read it in the first place because Gary Gygax, the co-author of the Dungeons & Dragons game, was a fan, and the copy I read had an introduction by Ray Bradbury, also a fan. If I had read the book first as a 12 year-old, like Ray Bradbury, I might have enjoyed it more.

I read the Modern Library Classics edition, which also contains a short biography of the author, and the original illustrations by Frank E. Schoovener, which are nothing special. At the back of the book is a reading group guide, which consists of several questions, exactly like exam questions. I don't think this would be a good book for most reading groups.

That's an interesting review. I was planning, one day, to revisit the John Carter books. Honestly, I can't remember much about them except there were red and green Martians and some dudes with extra arms and there was a atmosphere generator maybe?

I'm wondering if the reason I don't remember much about them was because there really isn't much to remember. :) But I do have a fond feeling for them - which may be because I did read them when I was 12.

"Gods of Mars" is a great leap (heh) ahead of A Princess of Mars. Probably the best of the Mars books.

Best of the Dead Blogs